Scenes from the pretty village of Adare in County Limerick

These scenes were filmed for the opening sequence of ‘Hall’s Pictorial Weekly’. Keeping with the series tradition it shows the people of Adare going about their daily business. It is a wet day on Main Street and a number of people are using umbrellas, including one person cycling a bicycle.

Also shown in this sequence are some of the traditional thatched cottages near the entrance to Adare Manor and the Holy Trinity Abbey Church, once the country’s only Trinitarian abbey, founded in 1230.

This episode of ‘Hall’s Pictorial Weekly’ was broadcast on 14 February 1974. The footage shown here is mute.

The series allowed Frank Hall to follow his own interest in the lives of viewers throughout the country. Regarded as RTÉ’s flagship comedy show, it featured satirical sketches on current news stories and popular culture, as well as parody songs, comedy sketches, re-edited videos, cartoons and spoof television formats.

The show ran for nine series until 1980. 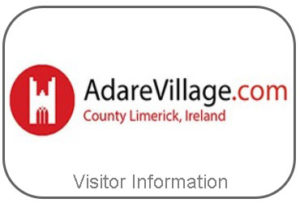